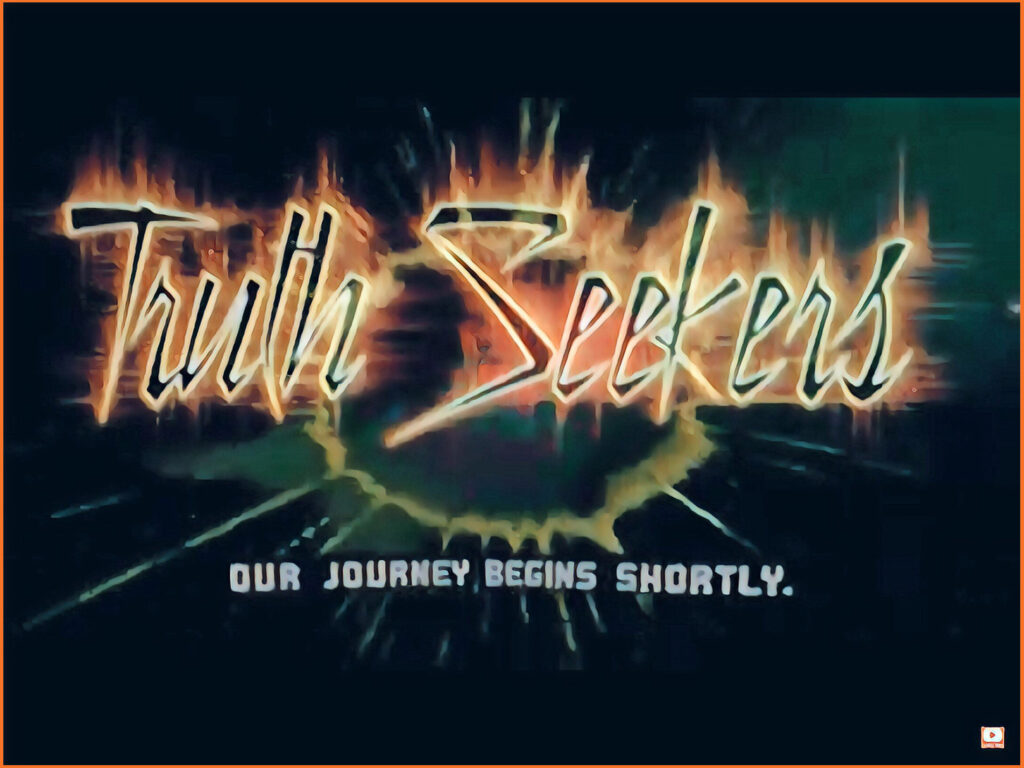 Nestled in the niche of the UFO conspiracy media is a show called Truth Seekers. Every live-stream starts with scantily clad dancing girls and grey aliens. A perfect hook for the sex starved science fiction nerd.

He begins each show with show with the line, “Greetings and Salutations.”

He sits behind a desk with goth black hair and a pair of sunglasses, as a cosmic blue background swirls around him.

Steven Cambian is one of the many YouTube content providers who specializes in the topic of Ufology.

A nemesis describes him as looking like Adam Sandler when he played Satan in the movie, “Little Nicky.”

Spooky a former producer of Truth Seekers says, “I work with Steven because he covers the bullsh*t in the field.”

Cambian is known for his distinctive and infectious laugh, and he often throws in puppets. comedy parodies, and eccentric guests into his broadcasts.

One of the most eccentric guests was the late John McAfee.

Cambian described McAfee as this super famous guy that would call him in the middle of the night while running from the law.

Having been what he calls a UFO experiencer himself since childhood, Cambian not only seeks the truth in the existance of UFOs, but he also debunks the phony ufologists and new age scammers.

Part of the formula of Truth Seekers is to trust but verify.

Cambian continues, “Okay, you had this really crazy experience. Love to hear about it, but I still need to verify a few things. Is their education real? Did they really work where they said they worked? People manufacture things to bolster their story, making them seem more credible.”

I became aware of Truth Seekers when a friend of mine shared a video of him, because we were both debunking the same new age scammer who was peddaling an essential oil remedy for Covid-19.

Since that day I have been a guest on Truth Seekers several times, joined several round table discussions, and even co-hosted his 400th live stream celebration.

Cambian and I are known to have a colorful and raunchy banter in our live streams, so if you are easily offended consider this fair warning.

We started the interview shortly after he arrived at the family cabin, which is an ongoing project that he shares with his subscribers.

Before we started, I asked Cambian if it might be possible for me to ask his wife a few questions too, just to get an outside perspective on his YouTube endeavors and successes.

He shouts to his wife, “Honey, this comedian girl wants to interview you too. I don’t know, she’s nosey and sh*t. Tell her I f*ck real good though. I laugh. Cambian continued, “She drank a lot a lot when she first met me.” I laugh again.

Cambian grew up where Rocky’s wife pet store is. He describes his hometown this way because most people have seen the Rocky movies.

“My reference gives people a sense of the elevated train in Philadelphia, and this sort of weird cramped neighborhood that I grew up in,” he said.

When asked why he starts every show with scantily clad girls, and dancing grey aliens.

Cambian explains that this whole UFO sub-culture was a circus, and people do circus types of things. P. T. Barnum type of things.

Cambian compared what he does at the beginning of his shows to a carnival barker who stands in front of carnivals, or strip clubs and shouts, “Live nude girls!” “Welcome to the circus!”

Cambian stresses that he learned a long time ago that in order to get attention, you must have that shock value. “We live in an attention based economy right now, which means the more attention generated, the more revenue a show makes,” said Cambian.

Before starting his YouTube channel Cambian was a musician who played in a theatrical band where he wore heavy make-up and used special effects.

He eventually quit the band after learning that he could get paid $300 per gig doing magic at children’s birthday parties.

“I think performing music and magic helped me with doing Truth Seekers, because when you are trained in those things, you see through deception more quickly than most people do,” he said.

However, in 2008 Cambian suffered an aneurysm that resulted in the loss of sight in one eye. He had life saving surgery and was in intensive care for a month.

“Just as easily as I lived. I could have stroked out and died instantly,” said Cambian.

He claims that the near death experience inspired him to research religion, spirituality, cults, and a curiosity to what lies beyond death. Some of these same topics are explored on Truth Seekers.

A substantial portion of YouTubers who expose the shady side of ufology have endured cyberbullying, doxing, and stalking, and this includes me.

So, I decided to ask , “Have you experienced any negativity from exposing scammers and fraudsters?”

“Great question,” he said, “I get harassed a lot by cult members of the groups or individuals. I have been doxed, I have had people threaten my family, and I have people threatening me with bodily injury all the time. People come into my chat and threaten my wife by name. I have had many threats of lawsuits. Most of that is just shut up tactics to stop you from exposing their con artist games.”

Cambian said that once his name and address became public, he invested in a good security system, and some guns.

There were three interviews from Cambian that stood out for me. They were John McAfee, a priest who exorcised demons for a living, and Whitley Strieber, who authored the book, “Communion.”

The book was made into a 1989 film starring Christopher Walken who played Strieber in the movie. Cambian disclosed that the one thing he learned from interviewing Strieber was that he and Walken did not get along.

Walken described Strieber as a crazed egomaniac, while Strieber criticized Walken’s Portrayel of him. Strieber would ask Walken not to play him so crazy and Walken would say, “Hey, if the shoe fits buddy. Gonna, do it my way.”

Cambian described John McAfee as an absent-minded professor, a genius kind of guy, who would call in the wee hours of the morning from a sattelite phone in a Faraday cage.

“Do you think he killed himself?”, I asked.

“I don’t believe he did,” said Cambian, “I hold up for both possibilities. He was a fighter, and I just don’t see him doing something like that. I know that he was in love with his wife. They spent all of their time together. Personally, I leave open the possibility that he might have might have killed himself too. He was getting old, and the possibility of having to live the rest of his life in prison may have caused him to check out. I spoke to his wife, and she doesn’t believe that he did.”

“I’m not sure if he had that information or not, but if he did, it wouldn’t surprise me if somebody killed him to keep something terrible, he knew from becoming public.,” said Cambian.

Cambian interupted my probing questions for a moment because his son had grabbed the scissors and started cutting his own hair.

Upon his return, I asked, “Why did you decide to interview a priest who performed excorcisms for a living?”

“I think it is very interesting that some people’s full-time jobs are to deal with demons,” said Cambian, “I like the fact that I was given insider’s access into a wierd phenomenon.”

He further explained that he grew up Catholic and had an interest in demons, and exorcism.

Cambian says that his YouTube channel is a part time job that he makes a good living from. Covid hit and he decided to make it his job 100 percent. All chips in. He went for it. He estimates that next year will be the best full time paycheck that he has ever had. “The money grows every month, and there is no end sight to that not continuing. For me, it’s exciting,” said Cambian.